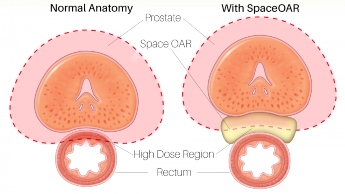 Radiation treatment for prostate cancer is potentially damaging to surrounding organs and tissue. A gel-like material called SpaceOAR is being used at Crozer Health to temporarily distance the prostate from the rectum. This dramatically improves some significant side effects for men who undergo prostate radiation therapy.

The challenge with prostate radiation therapy is to maximize radiation to the prostate while not radiating the surrounding healthy tissue. The prostate and rectum, however, are naturally separated by a small space. Because of the close proximity, radiation can accidentally damage the rectum.

SpaceOAR (OAR stands for “organs at risk”) hydrogel helps prevent this by expanding the space between the prostate and rectum, remaining in the body for about three months. After that, the gel is typically absorbed by the body. The hydrogel is made of two liquids that, when combined, form a soft, gel-like synthetic consisting mostly of water. This biodegradable material historically has also been used as surgical sealants on the eye, brain, and spine.

SpaceOAR was introduced at Crozer Health in 2018. It’s offered to patients with an appropriate anatomy for the procedure, who are about to undergo either external beam radiation with intensity-modulated radiation therapy or stereotactic radiosurgery with CyberKnife, said Stephen A. Arrigo, M.D., Chair of Radiation Oncology at Crozer Health .

“We’re inserting markers to guide the radiation treatment and, in the same procedure, injecting the hydrogel, which reduces radiation exposure to the rectum by 70 percent and reduces the symptoms of proctitis by 70 percent,” Dr. Arrigo said.

SpaceOAR gel is inserted by transperineal injection under general anesthesia. It typically takes about a half-hour, he explained.

In a clinical study, SpaceOAR patients who had erections sufficient for intercourse prior to undergoing prostate radiation therapy were 30 percent more likely to retain sexual function after their treatment. Hydrogel has also significantly reduced urinary side effects of radiation therapy, including incontinence. “We’re able to reduce the dose to the bladder neck because the hydrogel changes the geometry,” Dr. Arrigo said. “Urinary frequency, urgency, and burning during urination all have to do with bladder neck dose.”