Have You Had Your Flu Shot Yet?

Flu season is upon us—which means you’ll need a flu shot this fall if you haven’t already gotten one.

But getting a flu shot isn’t a guarantee that you won’t get the flu. So, how much does it help, then? “The overall effectiveness of last year’s vaccine was 38 percent,” said Dorothy A. Slavin, M.D., F.A.C.P., an infectious disease physician at Delaware County Memorial Hospital. “While that may not sound especially high, it was still very effective at preventing serious illness.” 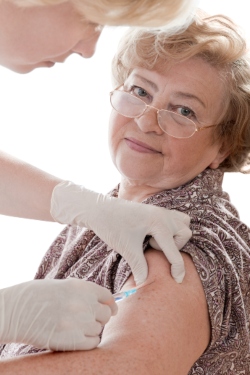 According to the Centers for Disease Control and Prevention, last year’s flu vaccine prevented 7.1 million illnesses, 109,000 hospitalizations, and 8,000 deaths.

Everyone six months and older, and especially those with underlying conditions, should get a flu shot no later than the end of October, Dr. Slavin said. The flu generally begins circulating in the fall. Some years, it can be as late as November. Still, it takes two weeks from the date of the shot for the vaccine to take full effect.

The vaccine’s effectiveness wanes after six months. It also varies slightly from year to year in an effort to match it to what are expected to be the most prominent flu strains of the upcoming season. So it’s important to get a flu shot each year.

The flu is extremely contagious. It can spread from one person to another standing within six feet of each other via droplets from sneezing, coughing, or simply talking. According to Dr. Slavin, symptoms usually come on abruptly, unlike a cold, and they can be severe: fever, chills, headache, and body aches.

If you experience any of those symptoms, contact your family doctor. Also seek your doctor’s advice about the best places to get your vaccination soon.