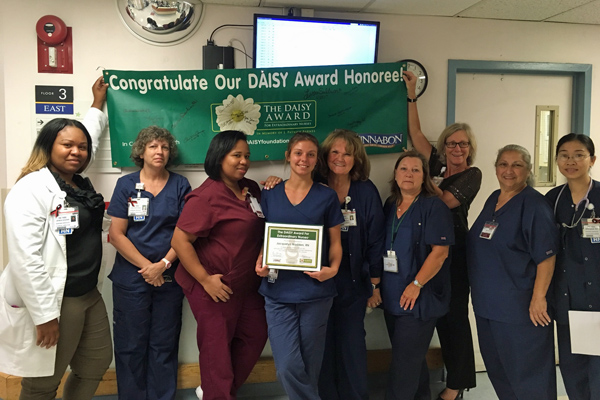 Crozer Health recently recognized Jacquelyn Madden, R.N. of Springfield, a medical/surgical nurse at Delaware County Memorial Hospital, as a recipient of the DAISY Award. This award recognizes nurses who consistently meet each of the following criteria: Dedicated, Autonomous, Innovative, Selfless and Extraordinary. Madden was nominated for the award by one of her patients.

In his letter, the patient candidly recounted a recent hospitalization at DCMH – where he was fortunate to be placed in Madden’s care: “I was in the hospital,” he said, “and the first few days were bad because I was withdrawing from an overdose. Jacqui was able to get me comfort medication so that I wasn't suffering. In addition, [upon evaluation,] they found a slew of medical problems. Jacqui is the sweetest person and so compassionate toward her patients.”

“Jacqui is an amazing nurse,” says Jenea Dozier, MSN, R.N., PCCN, clinical nurse director at DCMH. “Her colleagues often compliment her on her clinical skills and critical thinking, especially for being a newer nurse. She is engaged in the unit and often works in the role of charge nurse and preceptor. Her compassion for her patients is evident by the care she gives them every time she works. This nomination is a true testament of a nurse’s essence - a human with compassion for another human, without bias or judgment. I am truly happy to have her as a part of the team!”

“I would say that, hands down, she is the best nurse I have ever dealt with,” Madden’s patient said. “She deserves this award.”

The not-for-profit DAISY Foundation was established by family members in memory of J. Patrick Barnes, who died in 1999 at the age of 33 from complications from an autoimmune disease. The care that Barnes and his family received from nurses throughout his illness inspired this unique means of thanking nurses for making a profound difference in the lives of their patients and patient families.

Each DAISY Award honoree is recognized at a public ceremony on his or her unit and receives a certificate, a DAISY Award pin and a beautifully hand-carved stone sculpture. In addition, the unit celebrates their colleague’s achievement with Cinnabon cinnamon rolls, which were a favorite of Patrick’s during his illness.