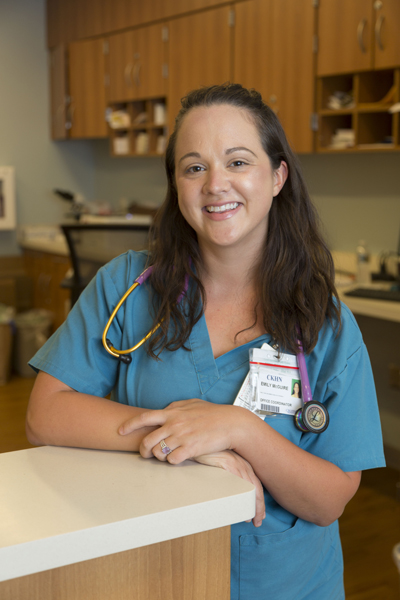 When she started experiencing migraine headaches at age 16, Emily McGuire of Swarthmore, Pa. was diagnosed with a Type 1 chiari malformation. The condition is characterized by a structural defect in the cerebellum, the part of the brain that controls balance, causing part of the cerebellum (called the cerebellar tonsils) to sit below the opening to the spinal canal. The type of chiari malformation that McGuire had is often not diagnosed until adolescence or young adulthood, and is typically treated by managing the pain and other symptoms with medication for as long as possible.

However, two years ago — now an adult and an employee of Crozer Health— McGuire began having hearing and vision problems as a result of her condition. After consulting with Crozer Health physicians Sean Conroy, D.O., internal medicine, and otolaryngologist John Feehery, M.D., she was referred to Richard Buonocore, M.D. At that point, surgery was the only way to provide lasting relief. Dr. Buonocore, a Crozer Health neurosurgeon, performed chiari decompression surgery at Crozer-Chester Medical Center, consisting of a suboccipital craniotomy (removing a section of the skull to relieve pressure) and a c1 laminectomy (removal of part of her vertebrae). The surgery is performed under general anesthesia and requires considerable post-operative recovery time in the hospital and at home.

Dr. Buonocore commented that McGuire did well throughout the procedure, saying that “it was a textbook procedure with a very good outcome.”

Although the serious nature of the surgery would be understandably worrisome for any patient, McGuire describes the process as a surprisingly comfortable experience. “Everyone at Crozer made me feel at ease, like they really cared,” she says.

McGuire received calming and reassuring care from everyone she encountered throughout her Crozer experience — from the nurses, to staff in the step-down unit, to Dr. Buonocore himself — creating a true patient-centered environment. “Even Kathleen Smith, the receptionist at Dr. Buonocore’s office, deserves credit. Every time I called she would really listen — she never rushes you or makes you feel like an inconvenience,” she says.

Now that McGuire is eight months past her surgery and has been cleared to go back to her regular activities and lifestyle, she looks back on what she went through in awe, saying, “it really was an incredible experience.”

Neurosurgeons perform surgery on the nervous system, which involves both the spine and the brain. Many spine and tumor surgeries can now be performed minimally invasively using image-guided techniques. Crozer Health’s neurosurgeons treat conditions that might otherwise lead to long-term neurological and physical disability.