When Pizza is More than Just a Meal 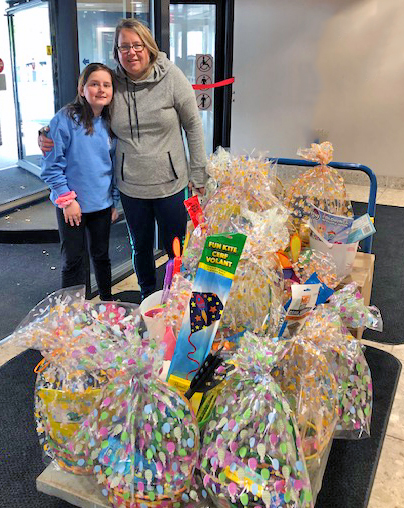 The mother of three young kids, Carrie Santoro has every reason to focus all of her attention on her family during the quarantine. But that’s just not who she is. Even before the COVID-19 pandemic, Santoro and her family regularly served meals at a local food shelter. So, as the seriousness of the virus became apparent, Santoro’s mind naturally turned to how she could help.

“My husband is a physician assistant. When this first started, he told me morale was challenged at his hospital and there was a general sense of concern,” Santoro said. “That lifted briefly one day when a bunch of meals were donated.”

Santoro immediately understood that’s where she would devote her energy. Having never organized a fundraiser before, she launched a campaign on Facebook with the goal of raising $12,000 to feed frontline health care providers around the region. As of April 30, Santoro had raised nearly $16,000.

“Early on, I noticed there were a lot of meals going to the ERs and ICUs, and rightfully so, but there are a lot of other people out there on the frontline, and I wanted to make sure they were taken care of, too,” she said.

She arranged for hoagies and pizzas—enough to feed 150 people—to be delivered to the night shift at Delaware County Memorial Hospital, near their home. Later, she also donated 50 Easter baskets to the hospital that her kids helped her fill. They were distributed among Crozer Health teammates who hadn’t had time to shop for their own.

Over the last month, Santoro sent 20 pizzas to Crozer-Chester Medical Center and another round of sandwiches and pizzas to Delaware County Memorial Hospital, this time to feed the much larger day shift. She’s also sent pizzas to nursing homes and fire and ambulance stations, and she made and delivered bundt cakes to employees at her local ACME.

Along the way, she asked the kids in her neighborhood to craft their own thank-you cards, which she’s been including in the various deliveries—all of which she orders from local, independent restaurants, helping on another front.

On one recent night, Santoro and her kids stayed up until midnight making facemasks, which she was also going to include in the deliveries for non-essential staff at the hospitals to use.

“When I send these meals, I just want to say thank you. That’s it. It’s not important that they know my name,” Santoro said. “A simple gesture of gratitude can mean so much these days. And I hope it continues long after this is over.”