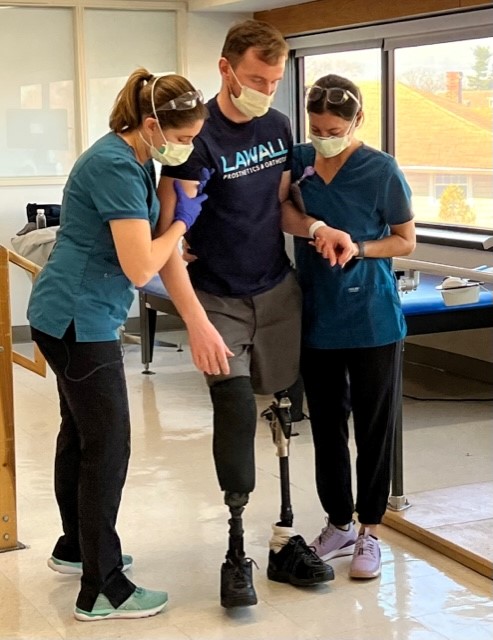 The inpatient rehab team at Taylor Hospital recently provided care for a Ukrainian combat engineer who lost his legs in an explosion during the Russian/Ukraine war, helping him learn to walk and eventually return to Ukraine.

The plight of 23-year-old Lieutenant Roman Stashkiv was brought to Crozer Health’s attention by Dr. Daniel Kane, medical director for the Regional Rehabilitation Center at Taylor Hospital. Dr. Kane was a medical resident for the father of Sean Bonner. The younger Bonner is a former Navy Intelligence Officer from Delaware County and co-founder of the Guild Foundation, which supports a broad range of issues impacting the military.

The Guild Foundation has been supporting humanitarian efforts in Ukraine for the past eight months and while Bonner was volunteering there, he was informed about Lt. Stashkiv’s serious injuries and was asked if he could help. He contacted Dr. Kane, who asked Crozer Health leadership if the health system would provide these much-needed services at no cost, and there was no hesitation.

The rehab team provided physical and occupational therapy to help Lt. Stashkiv walk with his new prostheses (provided at no cost by Lawall Prosthetics and Orthotics Services) as well as psychological counseling. He was recently discharged from inpatient therapy with an emotional “clap-out” ceremony – where he left the hospital on his own using crutches as everyone clapped, hooped, and hollered in support – and will receive outpatient therapy before returning home to continue his military service in a different capacity. He is very grateful for all of the support he has received from everyone in the U.S., including the Ukrainian community in the greater Philadelphia area, but is eager to return home to his unit and his family. The team at Taylor plan to remain in touch with Lt. Stashkiv, even after he returns to Ukraine.

This story captured the attention of the local news media which covered his rehab and discharge, and interviewed the key people involved in bringing Lt. Stashkiv to the U.S.

Below are links to coverage on CBS-3 TV and FOX-29 TV:

For information or to find out how you can help Lt. Stashkiv, visit https://theguildfoundation.org/operation-roman.