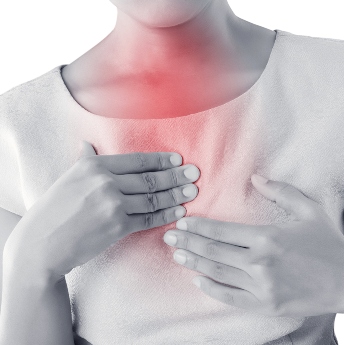 The holiday season could just as accurately be called the “overindulgence season,” especially when it comes to food and drink. From Thanksgiving through New Year’s, this time of year can lead to more gastrointestinal issues than usual, including heartburn and acid reflux.

“During the holidays, people tend to go outside their norms…eating and drinking more than usual, eating foods they might not regularly have, and eating at abnormal times like late at night,” said Joyann Kroser, M.D., a gastroenterologist and medical director of the Crozer Endoscopy Center at Brinton Lake in Glen Mills. “All of these things can lead to some uncomfortable symptoms.”

“In most cases, over-the-counter antacids can take care of the problem – brand names include Tums, Rolaids, Pepto-Bismol and Mylanta,” Dr. Kroser said. “These medications are usually effective and work fast. If something stronger is needed, there are other classes of medications called H2 receptor blockers and proton pump inhibitors. Most of these are also available over the counter.

“Almost everyone has acid reflux or heartburn periodically, but people who experience these problems more than three times a week should see a doctor to make sure nothing more serious is present,” she added.

Preventing these problems in the first place is often the best course of action, according to Dr. Kroser. She recommends avoiding known symptom “triggers” such as fatty or fried foods, alcohol, soda, chocolate, coffee, garlic, onions, tomato sauce and peppermint. She also suggests eating smaller portions, not overstuffing yourself, taking a walk after eating to help with digestion, and not lying down for a few hours after a big meal.

“I often tell people to be ‘grazers’ rather than ‘gorgers’ when they hit the holiday party circuit,” she advised. “Moderation is usually the key to avoiding these common GI complaints.”