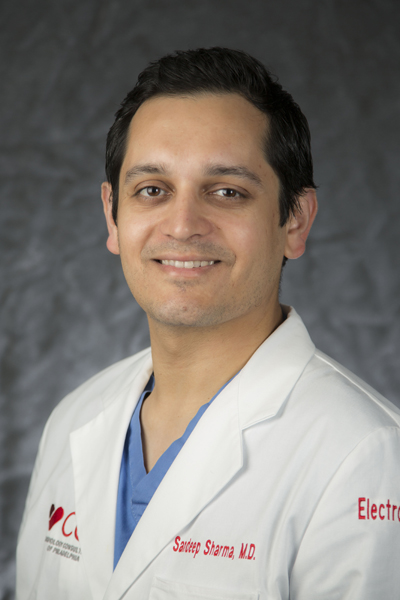 For the estimated 6.1 million people in the United States dealing with atrial fibrillation (AFib), suffering a stroke or recurrent strokes is a very real risk associated with their condition. However, a recent study provides new hope for patients with a history of AFib-related strokes. A treatment option called catheter ablation helped patients in the study reduce their long-term risk of another stroke by 50 percent. One of the most important findings of this study was that stroke rates in patients that underwent an ablation were similar to patients with no history of atrial fibrillation.

“Once someone has had a stroke related to AFib, they’re at a higher risk for experiencing recurrent strokes because of their underlying condition,” says Sandeep Sharma, M.D., Crozer Health  electrophysiologist. “The goal of treatment is to get AFib under control and reduce their risk for stroke.”

AFib, which is sometimes called arrhythmia, causes the heart to beat in irregular patterns. Normally, cells in the heart release electrical signals that make the chambers of your heart beat in a coordinated way. With AFib, these signals are out of sync and the two upper chambers of the heart, called the atria, beat irregularly and too fast.

“When the atria are not beating properly, blood is not squeezed through the heart efficiently,” Sharma says. “This can cause blood to pool in the corners of the heart where it shouldn’t be. When blood is static, it can form clots.”

If these clots make their way to the brain, a stroke can occur. Medications such as blood thinners are used to prevent these clots, and antiarrhythmic drugs are used to treat AFib and return the heart to its normal rhythm.

However, both types of medications have side effects that may be intolerable for some patients. In fact, antiarrhythmic drugs restore a normal heart rhythm in less than 65 percent of patients, and many patients discontinue their use after a year of treatment because of the side effects.

For patients that meet the American Heart Association’s guidelines, catheter ablation may be a better treatment option. Patients are typically discharged the next day and return to their normal routine about a week after surgery.

“In the vast majority of patients, their AFib is triggered by muscles around the veins that bring blood back into the heart,” Sharma says. “With catheter ablation, we create a line of scars around these muscle sheaths so they are incapable of creating this problem in the future.”

During catheter ablation, a catheter is inserted into a blood vessel in the leg and guided into the heart. There, the doctor will use heat to create a scar in the areas of the heart that create the abnormal electrical signals that cause AFib.

Sharma performs this procedure with a cutting-edge tool called a contact force-sensing catheter. This allows him to get very precise feedback while he’s applying pressure and heat during the procedure.

“With this tool, we’re able to create more targeted and effective scarring to reduce or eliminate AFib,” Sharma says. “It’s an important safety measure that helps us increase success, and reduce and nearly eliminate complications.”

The biggest benefit of this type of procedure is the reduction of AFib symptoms, including fatigue, shortness of breath and palpitations. Catheter ablation is statistically more effective at reducing these symptoms that antiarrhythmic drugs without the side effects.

“If you’re experiencing the common symptoms of atrial fibrillation, don’t wait to see your doctor,” Sharma says. “AFib treatment, including catheter ablation, is most effective when it’s done early.”