Skip to Main Content
Home / News / News Releases / 2017 / It’s Back to Sports – and Life – for Gary Fairchild, Thanks to Crozer Health Interventional Cardiologist

It’s Back to Sports – and Life – for Gary Fairchild, Thanks to Crozer Health Interventional Cardiologist 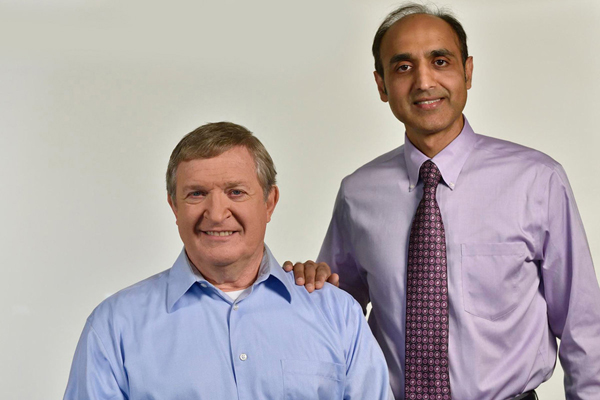 Gary from Wallingford, Pa. had a blocked artery. He can share his story thanks to Dr. Raza.

Gary Fairchild, of Wallingford, is Penn State proud. A die-hard Nittany Lions fan, Fairchild loves nothing more than to spend time with his sons in Happy Valley, cheering his team on to victory. In generally good health, Fairchild never suspected he'd have a heart attack - much less at one of the games. But in November 2013 that’s exactly what happened.

The symptoms were vague; his first thought wasn’t a heart attack. “At the end of the first quarter I was feeling pain in my upper back and a little bit of flushing,” Fairchild recalls. “I tried to stretch it out but it wasn't working. I went to the first aid station and got some ibuprofen, but that didn't help either.”

Still not aware that something serious was going on, Fairchild drove himself home. At his sons’ urging, he went to Crozer-Chester Medical Center’s Emergency Department, where he was stunned to learn he had, in fact, had a heart attack. Afterward, his cardiologist, Crozer Chief of Cardiology Ancil Jones, M.D., ran some tests. “My three main arteries were pretty clear, but a ‘sub’ artery was 100 percent blocked,” Fairchild recalls.

With diagnosis in hand, Fairchild and his medical team opted to try medication therapy as their first line of defense. It worked for about 18 months, but he then started noticing that he couldn’t walk fast or far without losing his breath. When he experienced that now-familiar chest discomfort again, in May 2016, he wasted no time in getting the diagnosis - another artery was completely blocked. It was time to move on to a surgical procedure.

As we age, or as a result of hereditary factors or other health conditions such as high blood pressure and high cholesterol, our arteries can become blocked with plaque - a hard, waxy substance. This buildup typically happens over time and isn’t noticed until symptoms - such as Fairchild’s - appear. Medication management is the typical first-line treatment; but when that fails to relieve symptoms, procedures such as angioplasty and coronary artery stenting are the next, best choice.

Coronary artery stenting is an outpatient procedure performed in a cardiac catheterization laboratory. Raza explains the process: “Patients are under conscious sedation during the procedure,” he says. “Once the catheter is placed in the radial artery of the wrist, it’s engaged with the blood vessel of the heart that has a blockage. A wire is passed through the catheter and then through the blockage in the blood vessel. This is followed by a balloon over that wire, placed at the site of the blockage. The balloon is inflated, which dilates the blockage, then removed. A stent is then placed over the same wire and inflated to eliminate the blockage.” Afterward, patients typically rest for a couple of hours and are then encouraged to get up and walk around. “In many cases, the patient is discharged home the same afternoon,” Raza says.

Fairchild is thrilled with the outcome of Raza’s work. Most importantly, he’s able to keep up with his sons again as they trek back and forth to watch their beloved Nittany Lions take to the gridiron.

As for his cardiac health, Fairchild now pays closer attention to what his body tells him - and urges others to do the same. “I tend to minimize things,” he says, “and I try to tough it out. My symptoms were related to a heart attack, but not what I thought was a heart attack. I totally misjudged.

“My sons said that Crozer was the best choice for me, and it was. It’s such a load off my mind. I can now do all the activities I want without fear that I am overexerting myself. Thank you, Dr. Raza.”

Crozer Health is a longtime leader in the diagnosis, treatment and rehabilitation of patients with heart and vascular disease. For more information about the health system’s cardiovascular programs, visit crozerkeystone.org/Heart. Call 1-800-254-3258 (1-800-254-3258) to find a cardiologist, interventional cardiologist or cardiovascular surgeon who’s right for you.