Skip to Main Content
Home / News / News Releases / 2018 / Got a Sneeze and the Sniffles? Here's When to See the Doctor

Got a Sneeze and the Sniffles? Here's When to See the Doctor 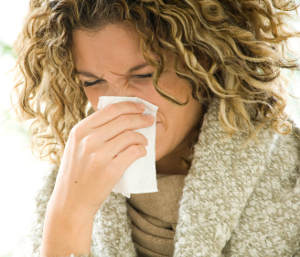 Winter may bring the holidays, family fun and food, but it’s also the season of sniffles and sneezing. You'll probably have a runny nose or be around someone with one soon — if you haven’t been already. While runny noses and sniffles are common, it’s important to know when you can treat them on your own, and when you should see a doctor.

“Anything that irritates or inflames the nasal tissues can lead to runny noses, sniffles and sneezing. Typical causes include the common cold, flu or allergies. There are certain symptoms along with an irritated nose everyone should keep an eye on, since they might mean something more serious like a sinus infection,” says Dina Capalongo D.O., FACP, physician director of Primary Care at Crozer Health.

When You Should See a Doctor

A runny nose happens when nasal tissues and blood vessels in the nose produce excess fluid—ranging from a clear, thin fluid to thick mucus. This drainage can run either out of the nose, down the throat or both.

If you have an irritated nose caused by a cold or flu, it’s usually accompanied by other noticeable symptoms.

“Runny noses caused by an infection like a cold or flu come with a mix of other symptoms,” Capalongo says. “You may also have a sore throat, headache, fever, cough, or mucus buildup in the nose or throat.”

Colds typically only last for 10 days or less and often go away on their own.

If your nasal symptoms persist or get more severe, it could be a sinus infection. Symptoms of a sinus infection include pressure behind the eyes, bad breath, a headache that gets worse, decreased sense of smell and thick yellow or green mucus coming from your nose or throat. If your symptoms get worse rapidly and include a high fever, nausea and vomiting, it could be the flu. In either case, you should see a doctor for diagnosis and treatment.

"Sinus infections and the flu can be serious and difficult to get rid of. Bacteria, allergies and viruses can cause these types of infection," Capalongo says. "Touching your nose a lot brings germs near your nose and mouth, which can then make you sick. It’s important to wash your hands frequently and avoid touching your face, especially during cold and flu season."

Any virus that might be causing your nasal symptoms can't be treated with antibiotics. Get over-the-counter medications that target specific cold symptoms – such as decongestants, cough medicine or acetaminophen. And make sure to get plenty of rest.

If you have a persistent fever, coughing or congestion that does not go away after a few days, see your doctor. These symptoms may be a sign of other health problems that need a doctor’s attention.

If you think you might have a sinus infection, talk to your doctor. This type of infection can often go away on its own once treated with prescribed antibiotics. You can get some relief while waiting for the antibiotics to work by taking decongestants and mucus thinners.

“Runny noses, sniffles and sneezing are very common and usually do not indicate anything serious. It’s important to be aware of any other symptoms you have with an irritated nose and see a doctor if you're concerned about your current health,” Capalongo says.