After his father died, Ridley Park resident Michael Fital fell into depression and a cycle of overeating. That led to weight gain, which led to more depression and more overeating. By the time he was 28 years old, Fital weighed 538 pounds.

He was borderline diabetic, uncomfortably retaining fluids and suffering from high blood pressure, high cholesterol and sleep apnea. Fital was frustrated that he couldn’t keep up with his toddler son, Michael III, and that he couldn’t tie his own shoes – yet none of his efforts to lose weight yielded results.

“I’d tried diets. I tried exercise, but it wasn’t enough to make a difference,” he says.

When his family doctor recommended that he see Aley Tohamy, M.D., at the Crozer Health Center for Minimally Invasive and Bariatric Surgery, Fital was at first skeptical.

He went through the initial consultation and first steps of the pre-surgical process and lost 38 pounds on a medical diet. Though he liked and trusted Tohamy immediately, Fital wasn’t entirely sure he had the motivation to go through with the recommended gastric bypass surgery and adopt the lifestyle changes required for success.

All of that changed when he had an endoscopy as part of his preoperative testing. The routine procedure was complicated by obstructed airways, a result of the sleep apnea and his excess neck fat. Waking up intubated and restrained served as a definitive wakeup call. If Fital didn’t commit to making some serious changes he might not get to see his son grow up.

“I realized that life is very fragile and we’re only here for a short time. That’s when I got on the ball. After that, I lost 93 pounds in the six months before the surgery,” he says. “I knew how badly I wanted this and I was coming for the victory.” 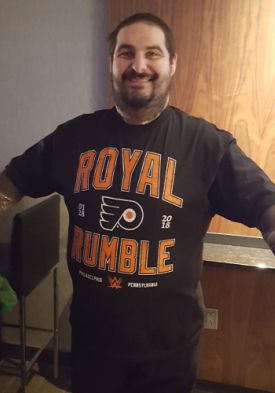 Bariatric Surgery is a Weight-Loss Tool

Bariatric surgery is not a magic solution—it’s a tool, Fital explains. What’s helped him stay motivated are the supports in place at the Center for Minimally Invasive and Bariatric Surgery. He attends a monthly support group to stay on track.

“We see the surgery as just one piece of the puzzle,” Tohamy says. “It’s also about exercise, behavior modification and preparing patients psychologically for what they will face. That’s why we feel it’s important to cater to patients on a personal level so we know all of the challenges at hand.”

Tohamy makes it a point to get to know his patients and make himself available for questions at all times. He credits the Center’s superior outcomes and four designations as a Center of Excellence on that individualized approach to care.

“Dr. Tohamy has an amazing bedside manner,” Fital says. “He asks me about my surgery and how I’m feeling but also about my life. He’s very generous with his time, which is exactly what you want when you’re taking on something like this. And everyone in the office is very accessible along the way, too. You know they have your back.”

With the support of his wife, Jennifer, Michael Fital has overhauled his lifestyle. He eats a portion-controlled diet and walks for 40 minutes every morning and every evening. He’s now down to 306 pounds, just 30 more pounds away from his goal weight.

He’s gone from size 7X to 2X, and has cut his belt at least seven times to fit his shrinking waist. Though he still misses his father, he has a better handle on his grief with healthier coping mechanisms. He notices people looking at him differently. Better still, his medical conditions have all improved as a result of the metabolic surgery.

Fital knew his life had been transformed the moment he realized he could tie his own shoes again. “I was practically in tears. I see this as a second chance—it’s truly been a blessing to have my life back.”

Get more information about the Crozer Health Center for Minimally Invasive and Bariatric Surgery.