Is Vaping a Healthier Alternative to Smoking? 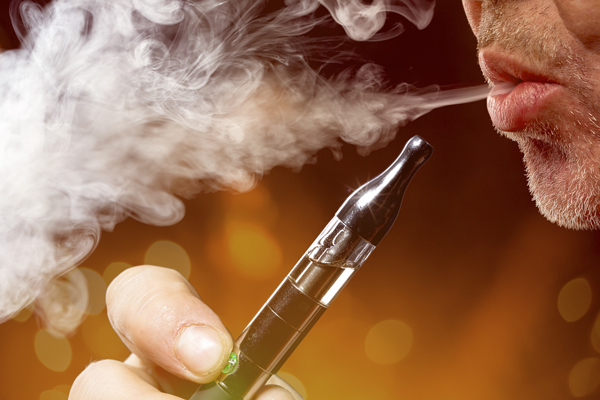 E-cigarettes are considered smokeless since they produce a vapor instead of smoke.

While it is general knowledge that smoking cigarettes is bad for you, many Americans still continue to smoke. In recent years, e-cigarettes have been introduced and marketed as a healthy alternative to conventional cigarettes. There is a belief that smoking e-cigarettes can be less dangerous than smoking regular cigarettes.

“While e-cigarettes are tobacco-free, there is evidence that they contain other harmful chemicals and still exposing the user to nicotine,” says Rima Himelstein, M.D., an adolescent medicine specialist at Crozer Health. “Some studies show that toxic compounds including formaldehyde have been found in e-cigarette cartridges.”

Electronic cigarettes, or e-cigarettes, are battery-powered devices designed to look like cigarettes and provide nicotine. Conventional cigarettes involve tobacco being lit up and inhaled because it naturally carries nicotine. In e-cigarettes, nicotine is also inhaled but in the form of a liquid mixed with flavorings and other chemicals. This mixture is heated in a liquid cartridge into a vapor, which can then be inhaled.

E-cigarettes are considered smokeless since they produce a vapor instead of smoke. This form of smoking is known as "vaping."

What are the Health Effects?

While cigarettes and e-cigarettes have some differences, they both are ways to inhale nicotine.

“Depending on the brand, each cartridge is designed to produce 250-400 puffs, about the same number of puffs as from one to two packs of tobacco cigarettes,” says Dr. Himelstein.

Getting addicted to nicotine can lead to a number of health problems. While not all e-cigarettes contain nicotine, most do. When you stop using nicotine, you can go through withdraw symptoms including getting agitated or depressed.

“The health concerns that come with e-cigarettes go beyond an addiction to nicotine,” according to Dr. Himelstein. “Studies have shown some e-cigarettes to carry formaldehyde and diacetyl – chemicals that can cause cancer and lung disease.”

Formaldehyde is a chemical known to cause cancer in humans. Diacetyl is a chemical that can cause inflammation in your lungs that blocks small airways. This is known as bronchiolitis obliterans or “popcorn lung.”

Are E-cigarettes a Way to Quit Smoking?

There are currently no FDA approved e-cigarettes that can be used to quit smoking. While smokers sometimes turn to e-cigarettes to reduce their intake of nicotine, this can sometimes have the opposite effect.

“E-cigarettes are a way for nonsmokers to be introduced and become addicted to nicotine. This could then cause them to try nicotine in other ways such as chewing tobacco and traditional cigarettes,” says Dr. Himelstein. “For smokers, vaping can cause them to draw out their addiction to nicotine longer than if they just stopped smoking altogether.”

Whether or not e-cigarettes can be considered a gateway to smoking, it does put a person at risk to exposing their lungs to harmful chemicals and getting addicted to nicotine.

“The FDA does not currently support any e-cigarette as a safe and effective way to quit smoking,” says Dr. Himelstein. “Smokers should talk to their doctors about proven tools such as medications and strategies that can help them to stop smoking.”